Workshop on “Geo Politics and its Impact on Countries”

Workshop on “Geo Politics and its Impact on Countries”

“Geo Politics” is all about leverage. We cannot make ourselves safer abroad unless we change our behaviour at home.” – Thomas Friedman

On a bright Saturday afternoon, the students of Symbiosis Institute of Business Management, Hyderabad, were addressed by Dr. Geoffrey Clements, current Chairman for Commonwealth Infrastructure Partners (CIP), on the topic ‘Geo Politics and its Impact on Countries’. 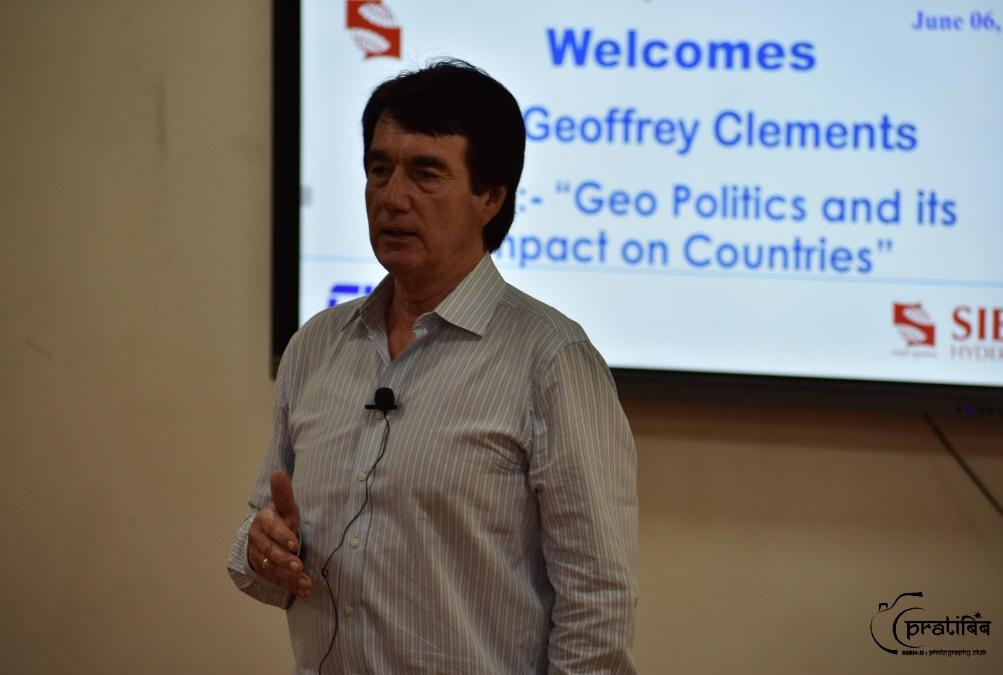 Dr. Clements began the discussion by giving us an insight into what the lives of the students would look like during the 18 months that they have left at SIBM, Hyderabad, as management students, along with the importance of knowing what impact our decisions can make over the long and short terms.

The first question that Dr. Clements put forward in his discussion on Geo Politics was, “What is the significance of India’s ever-increasing Global Role in World Politics?”. He went on to describe how the smallest of actions by the Indian government have a huge impact on international relationships, economic motivation and various other factors, both Global as well as Local. 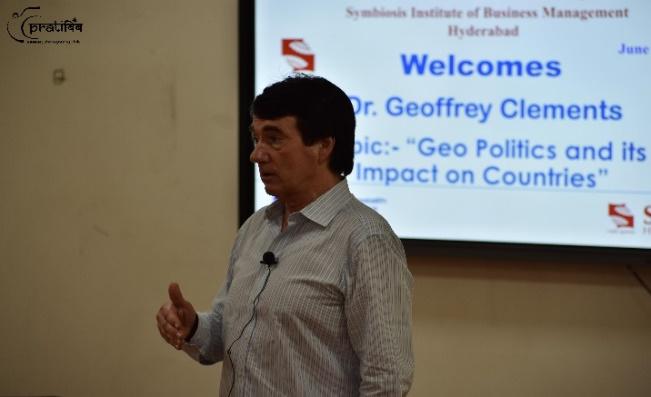 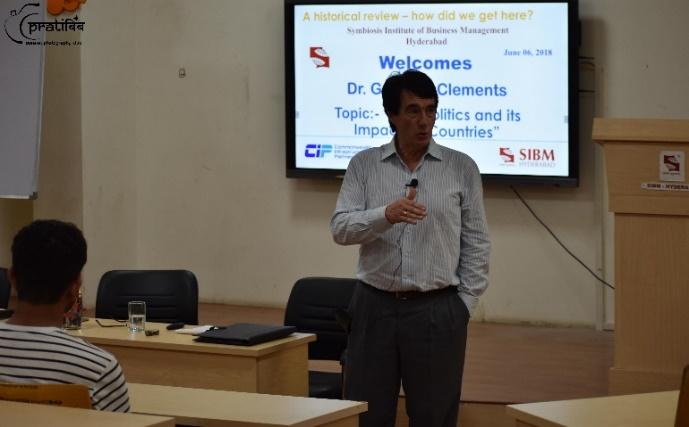 Citing another example, Dr. Clements showed the students how the actions of the current ‘Leaders of the Free World’, towards their adversaries and allies, has caused relationships across the globe to destabilize. He pointed out how ‘in the last decade, there has been a shift from Convergence to Divergence in Global Politics’, and how important it is now to have ‘International Connectivity’ across organizations, countries, cultures and people.

The discussion saw a lot of interaction between Dr. Clements and the students gathered in the Lecture Theatre, with many questions posed by the audience as to certain current events and their possible effects on the Global political and economic scenario. Topics such as Brexit, The USA-China Trade War, and various other theories and hypothesis were discussed and insights gained. 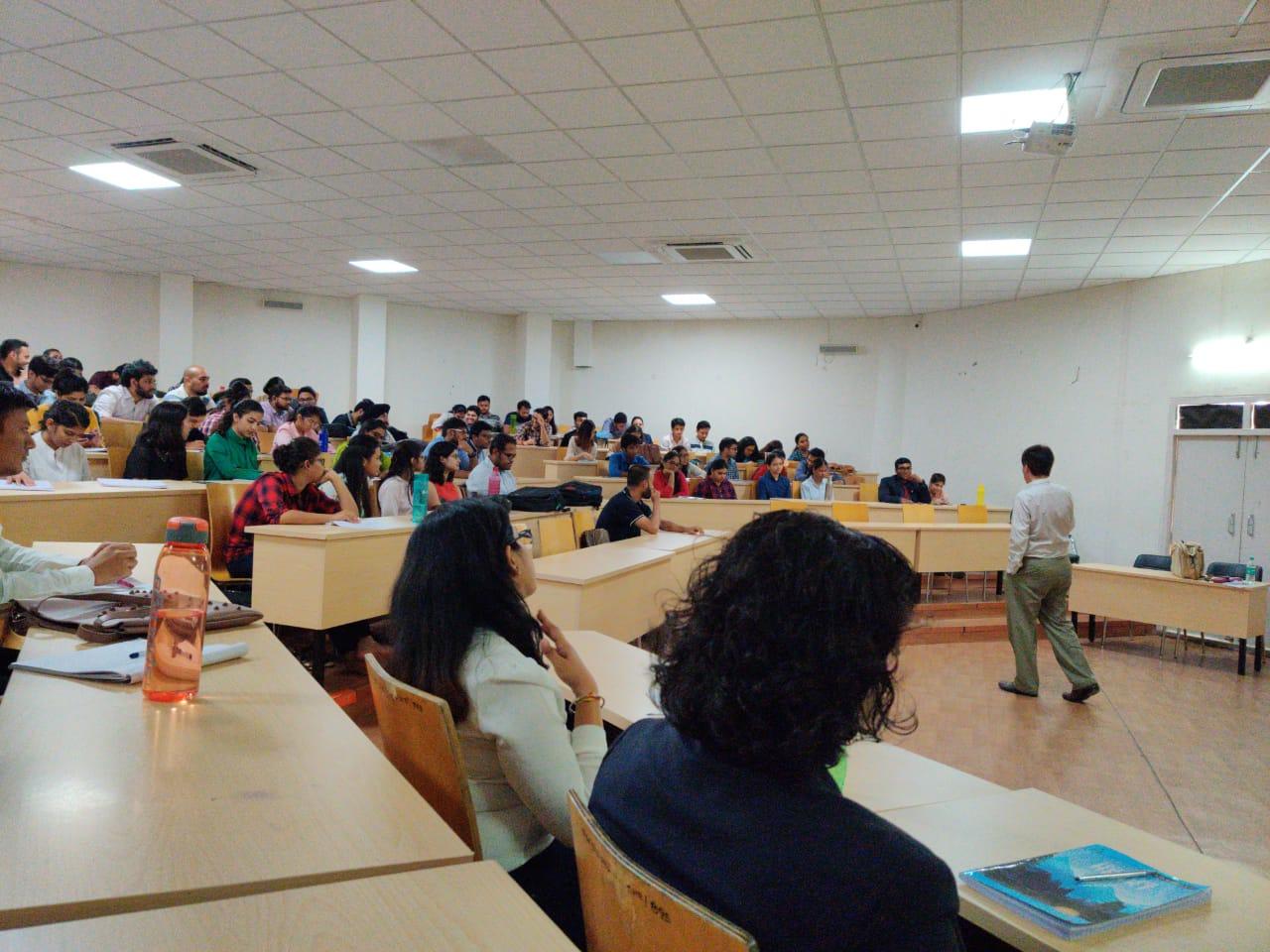 Coming to an industrial point of view, Dr. Clements gave an insight into how the actions of individual organisations could have long lasting effects on the global economy and create an impact on government decisions and policies, affecting millions in ways which could be either positive or negative. He cited the case of Tata Steel and Tata Motors, and how the business decisions of Ratan Tata and the top management at Tata, have created massive differences in the industry, and outside of it, on a global scale.

At each stage in his discussion with the students, Dr. Clements kept impressing upon them the importance of “Keeping abreast with current affairs, and understanding how to make connections between different world events”. He explained how even the smallest actions by us can create large differences in the future.

Dr. Clements also gave us an insight into the current position of the world super-powers and how their decisions are affecting every other economy on the map. The effect of changing alliances, treaties and accords, the ramifications of one misquoted sentence on the entire world, the difference in how an event affects a developed nation versus a developing nation - all of these points were brought to light and discussed at length, with a healthy give and take of information between the students and our esteemed speaker.

The session ended with a resounding round of applause by the students, and with Dr. Clements wishing the students his best for their journey as we enter the corporate world.